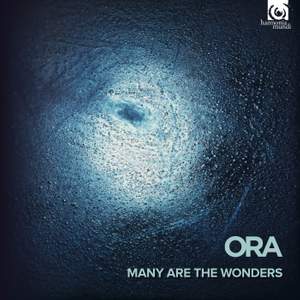 Many are the wonders

The Tallis is performed with a suitably gorgeous sound by ORA, even if this listener yearned for more sonic bite at times, but the choir soars in the disc’s new commissions. Alongside richly... — BBC Music Magazine, November 2017, 4 out of 5 stars More…

Ferko: Reflection on Thomas Tallis’ if ye love me

Tallis: Archbishop Parker’s Psalter: IV. O Come in One to Praise the Lord

Burton, K: Many are the wonders

Launched at the Cutty Sark in Greenwich, and with an appearance on In Tune, earlier this year, ORA'S third album for harmonia mundi pays tribute to the particular golden age of Thomas Tallis.

"The opening years of the 21st century can justifiably lay claim to being a new golden age for choral music. I wanted to embark on a series of recordings to reflect this and to showcase some of today’s best contemporary composers, placing their works in direct relief with masterpieces from previous ages. This recording, the second in our ‘Renaissance gems and their reflections’ series, looks at the music of Thomas Tallis, and we are delighted to have commissioned a number of talented composers to offer their personal reflections on his works. I hope that these new pieces, like Tallis’ originals, will find their way into the repertoire of other vocal groups, delighting audiences both now and in the future." Suzi Digby OBE

The Tallis is performed with a suitably gorgeous sound by ORA, even if this listener yearned for more sonic bite at times, but the choir soars in the disc’s new commissions. Alongside richly atmospheric works by Richard Allain and Frank Ferko, two pieces on the disc draw particularly bold, vivid colours from the choir: Kerry Andrew’s Archbishop Parker’s psalme 150…and Ken Burton’s Many are the Wonders.

brought vividly to life by ORA under Suzi Digby. In Tallis’s O nata lux the harmonies are so daring that the Tudor master sounds quite up to the minute himself

The singing itself is still immaculate – seamlessly blended through the voices, a halo of resonance surrounding a solid vocal core, keeping things from getting too fey and floaty. The structure of paired motets – a Renaissance point of inspiration and a contemporary setting – also continues to work well, slipping over half an hour of world premieres into a disc that should still have broad appeal.

The quality of the singing is first rate throughout, impeccably blended and beautifully tuned, giving a rich sense of unity to the whole endeavour…Suzi Digby is blazing a trail with ORA, building a bridge between older, well established music and contemporary composers, and she is doing it with exceptional intelligence. Many are the wonders, indeed.

If the gospel-influenced title-track (set by Ken Burton and featuring a stratospheric solo tenor as a sort of celebrant) is the most immediately arresting, it's the spacious sound-worlds of Richard Allain and Frank Ferko which make the most enduring impact.

ORA’s singing of Tallis is almost the opposite of what you might call English Cathedral chaste. The approach is assertive, the relish of moments of dissonance unmistakable

Really enjoyable juxtapositions; you get sixteen Tallis originals here alongside a variety of contemporary musical reflections