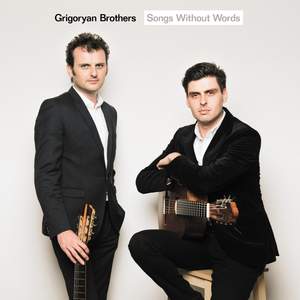 “We’ve always been drawn to music with great melodies and interesting harmonic progressions. As guitarists we want to ‘sing’ as much as possible when playing.”

Globally renowned for their superlative musicianship, Slava and Leonard Grigoryan have decided to get personal for their latest album. Performing arrangements made by their father Edward, the brothers have chosen songs that are particularly close to their heart, and as well as a few new discoveries – including timeless songs by Tchaikovsky (Chanson Triste, None But the Lonely Heart), Rachmaninoff (Vocalise), Elgar (Chanson de Nuit, Chanson de Matin), Bach, Ponce, Fauré and others.

The Grigoryan Brothers, individually and as a duo, are counted amongst the finest musicians of their generation. Between them, they have clocked up an incredible 21 ARIA Award nominations and their recording and performing careers – and popularity – continue to flourish.

Slava recently broke the record for the longest stretch at number one in the Classical Charts for an Australian artist, when his latest solo album Bach Cello Suites Volume I spent 13 weeks at the top.

Reflecting on their musical relationship with their father, Slava and Leonard comment: “He has developed a unique style of writing and arranging for two guitars – always democratic, extraordinarily detailed and with complete awareness of what we as individual players can, and cannot do. We’re so lucky to have this inspiring collaborator and mentor working as prolifically as he does!”

During their careers, the Grigoryans have developed a reputation for enthralling audiences with the sheer energy of their performances, and the breadth of their repertoire – from classical to jazz and world music. In addition to a global touring schedule, their collaborations at home include performances with the Australian Chamber Orchestra and baritone José Carbó, and in 2017 they will support Grammy Award-winning Canadian singer k.d. lang’s Ingenue Redux tour.