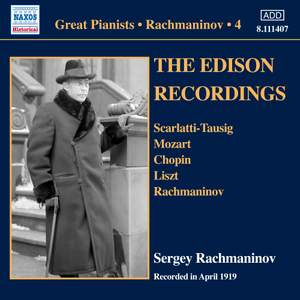 These archival gems are a must listen. Sergei Rachmaninov’s brilliance cuts through the constant crackle on these fledgling Edison recordings; the background fizz becomes a comfort rather than... — BBC Music Magazine, February 2018, 4 out of 5 stars More…

Liszt - Hungarian Rhapsody No. 2 (Take A)

Liszt - Hungarian Rhapsody No. 2 (Take B)

Rachmaninov was obliged to start a new life after abandoning all his possessions when leaving Russia for good in 1917. He sought his fortune in the New World, supporting his family as a pianist and giving numerous concerts. This activity generated interest from fledgling record companies, and before long Rachmaninov was working for Thomas Edison in his New York studio. These new transfers of ‘approved’ and ‘held’ takes made using the old acoustic process known as ‘hill-and dale’ reveal more about the instrument Rachmaninov played (probably a Lauter piano) than ever before, as well as opening out his robustly virtuoso approach to Chopin, the beautiful tone he gives to Mozart, and his breathtaking technique in Liszt’s Hungarian Rhapsody No. 2, the longest solo work he ever recorded.

These archival gems are a must listen. Sergei Rachmaninov’s brilliance cuts through the constant crackle on these fledgling Edison recordings; the background fizz becomes a comfort rather than an irritant.

Rachmaninov’s pianism is utterly and undeniably compelling. One for the pianophile for sure, but also for the non-specialist to sample the unique gifts and earliest recordings of one of the greatest pianists who has ever lived...What treasures – and what a service Naxos has performed in making them available in this form.