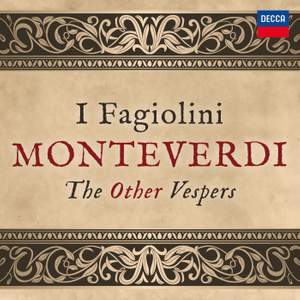 This is a glorious addition to the Monteverdi 450 celebrations. — BBC Music Magazine, September 2017, 4 out of 5 stars More…

Forming a response to Monteverdi’s timeless masterpiece Vespro della Beata Vergine (1610), these Other Vespers are centred around works from the end of his life, in 1640 following 23 years as maestro at St. Mark’s Venice. Including the celebrated Beatus vir.

A truly Venetian Vespers, arranged in a setting that could have been performed in Venice in Monteverdi’s time, with his sacred choral works alongside music of his contemporaries.

To coincide with I Fagiolini's 30th anniversary: the ensemble has always enjoyed a close association with Monteverdi.

Robert Hollingworth is a Monteverdi specialist; this is an authentic take on the repertoire, including the incredible soundworld of the cornetto muto alongside four male voices of I Fagiolini, in the Palestrina/Bovicelli Ave verum corpus - the first recording of such a reconstruction.

This is a glorious addition to the Monteverdi 450 celebrations.

There is plenty of warmth and animation in the superb music-making. I Fagiolini’s consort and solo singing are exemplary...In such sure hands (and throats) as these, Monteverdi’s psalm-settings reach their fullest capacity to enchant and astonish.

Nothing here is more haunting than Palestrina’s Ave verum corpus (1561), with its solo cornett descant added by Giovanni Battista Bovicelli (1594). A ravishing disc

The performances are exhilarating, especially the accelerandos.