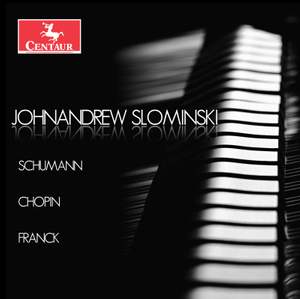 American pianist Johnandrew Slominski enjoys a distinguished reputation as a performer and pedagogue. His playing style is elegant and sophisticated, and has earned him praise from composers and critics alike. Chautauquan Daily hailed him as “a remarkable, brilliant, and gifted pianist.” A child prodigy, he gave his first public performance at the age of 5, won his first piano competition at age 6, and began college at age 15. For this release, he has chosen a variety of pieces that showcase his musicality: works by Robert Schumann, Frederic Chopin, and Cesar Frank. The album was masterfully engineered by Richard Wattie, and recorded in the stunning acoustics of Hatch Hall, Eastman School of Music, Rochester, New York.