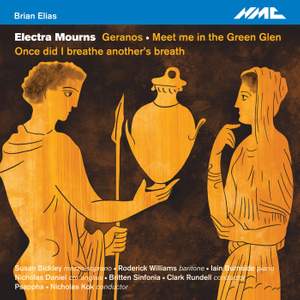 This recording [of Geranos] alternates baritone and mezzo, with Roderick Williams bringing an elegant lyricism to the opening song and Susan Bickley a touching vulnerability to 'Love's Pains'...Bickley... — Gramophone Magazine, July 2017 More…

Elias, B: Meet Me in the Green Glen

Elias, B: Once did I breathe another's breath

No. 3, Now Sleep, Bind Fast the Flood of Air

No. 4, Once Did My Thoughts Both Ebb and Flow

The title work on this new album by Brian Elias sets text from ‘Electra’, a 5th Century BC play by the Greek dramatist Sophocles.

It is sung in the original ancient Greek by mezzo-soprano Susan Bickley, accompanied by cor anglais and string orchestra, and recounts the tale of Electra and the vengeance that she and her brother Orestes take on their mother and stepfather following the murder of their father.

Continuing Elias's fascination with ancient Greece, Geranos is a dramatic and rhythmic ensemble piece inspired by a ritual 'crane dance' associated with Theseus, the mythical king of Athens.

In contrast, the two song cycles on this album are set to texts by English poets. Meet me in the Green Glen for unaccompanied solo voice is a setting of five John Clare poems, here performed by both Susan Bickley and Roderick Williams, and Once did I breathe another's breath for baritone and piano was commissioned for the 2013 Ludlow Weekend of English Song; the poems (some anonymous) were all written in the fi rst half of the seventeenth century.

This recording [of Geranos] alternates baritone and mezzo, with Roderick Williams bringing an elegant lyricism to the opening song and Susan Bickley a touching vulnerability to 'Love's Pains'...Bickley and Nicholas Daniel are assured in their contributions [to Electra Mourns], with Clark Rundell drawing requisite intensity from the Britten Sinfonia.