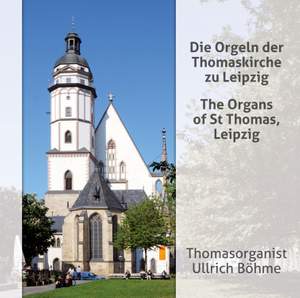 The Organs of St Thomas, Leipzig

The celebratory Allegroand solid Fugue are both delivered with considerable conviction and authority. The final Toccata is as scintillating as we would expect, and builds to a thrilling climax.... — MusicWeb International, December 2017 More…

St. Thomas, dating back to the twelfth century, is a musical landmark for the city of Leipzig, in which renowned composers like Gustav Mahler, Richard Wagner and Felix Mendelsson Bartholdy worked. Johann Sebastian Bach was the Thomaskantor here from 1723 to 1750, the world-famous Thomanerchor sings motets here every Saturday, and here resounds the wonderful music played on the instrument Wolfgang Amadeus Mozart once declared the "Queen of Instruments" and about which the poet Honore de Balzac said, "The organ is without a doubt the greatest, boldest and most magnificent of all instruments. It is an entire orchestra form which a skilled hand can demand everything." St. Thomas houses not one but two organs wtihin its walls. In 1889 Wilhelm Sauer built the organ, named after him, in the west choir loft. On the north gallery, the Bach Organ has stoody since 2000. The Sauer Organ has over 88 stops, and the Bach Organ, whose facade is adorned with the seal of the famous Thomakantor, has 61 stops. "Soli Deo Gloria" - Glory to God alone - is the motto by which Bach wrote his music. Even the organ music in the church services, motets and church concerts, which fills the nave architecture of the St. Thomas, reflects this proclamation. On the album "The Organs of St. Thomas, Leipzig", Thomasorganist Ullrich Bohme plays works by Johann Sebastian Bach, Leon Boellmann, Dieterich Buxtehude, Johann Ludwig Krebs, Felix Mendelssohn Bartholdy and Carl Piutti.

The celebratory Allegroand solid Fugue are both delivered with considerable conviction and authority. The final Toccata is as scintillating as we would expect, and builds to a thrilling climax. In Böhme’s clear and deliberate fingerwork we hear all the detail with exceptional clarity.