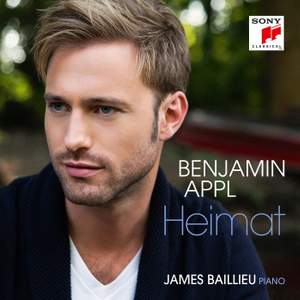 Appl is not only a singer of boundless promise, he is already a great artist. This disc shows how versatile he is, with not only great Lieder but interesting rarities too...Appl sounds as if... — BBC Music Magazine, June 2017, 5 out of 5 stars More…

Ireland: If there were Dreams to Sell

He is a former chorister of the famous Regensburger Domspatzen, Appl is now one of the most interesting artists of the new generation, with a great voice, charming personality and great stage presence.

The booklet of the limited first edition contains an additional essay by Neil McGregor, former director of the British Museum (famous for their exhibition about GERMANY) and upcoming director of the Berlin Humboldtforum.

Described as ‘the current front-runner in the new generation of Lieder singers’ (Gramophone Magazine, UK), Benjamin Appl is celebrated by audiences and critics in recital, concerts and opera. He is member of the BBC New Generation Artist scheme from 2014 until 2016 and was an ECHO Rising Star artist for the 2015/16 season, appearing in recital at major European venues including the Barbican Centre London, Concertgebouw Amsterdam, Wiener Konzerthaus, Philharmonie Paris and Cologne and the Laeiszhalle Hamburg. He has won the Gramophone ’Young Artist of the Year’ award in 2016 and Wigmore Hall London has named him a Wigmore Hall Emerging Artist (2015/16). The young baritone became an exclusive SONY Classical recording artist in May 2016.

Appl is not only a singer of boundless promise, he is already a great artist. This disc shows how versatile he is, with not only great Lieder but interesting rarities too...Appl sounds as if singing is his most natural mode of expression; and since he has an extraordinary beautiful voice, there should be decades of happiness as he continues to expand his repertoire.

The voice has a burnished, oaky beauty as well as considerable sweetness (well captured in Sony’s natural engineering), while the interpretations are suffused with a gentle intelligence, an instinct for unforced but direct communication and what feels like a real love for the repertoire.

[Appl] offers an intelligent exploration of the concept of ‘Heimat’ (home)…accompanying Appl – who responds to texts and their implications with ease – is pianist James Baillieu. His way with Schubert’s Seligkeit is exemplary, he captures the bitter-sweet tinge of Reger’s Des Kindes Gebet to perfection and provides a wonderful bed of sound for Schreker’s astonishing Waldeinsamkeit…a real winner.

His Schubert, Brahms and Wolf are impressive, thanks partly to James Baillieu’s finely judged piano playing...Appl was mentored by Dietrich Fischer-Dieskau, and while it’s a bit early to be naming him as successor to that great singer, as some are doing, this disc shows great potential.

Appl is a serious and diligent artist whose best virtue, apart from his brooding publicity snaps, is his mellow timbre and precise German diction.

A beautifully chosen recital: based around an abstract theme, certainly, but skilfully blending repertoire familiar and unfamiliar, intense and direct. His Schubert and Brahms are exquisite; Strauss’ Allerseelen even finer