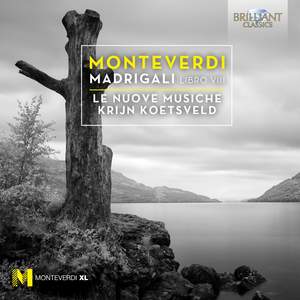 Claudio Monteverdi published his 8th book of madrigals in 1638, in a time when the opera as art form became steadily more popular. In order to add a theatrical character to his madrigals he named them “madrigali guerrieri e amorosi”, madrigals of war and love. They are indeed overtly dramatic in expression, in fact they may be called mini operas in its opposing characters, intense drama and programmatic writing. Highlights are the famous “Combattimento di Tancredi e Clorinda” (on text by Tasso) and the breathtakingly beautiful Lamento della Ninfa, one of the most moving laments ever written.

The vocal ensemble Le Nuove Musiche consists of the elite of Dutch Early Music vocalists, led by eminent conductor and scholar Krijn Koetsveld. Their first Monteverdi recording, the Books 5 & 6 (BC93799) received excellent reviews in the international press, among which a “5 star” in the French Diapason.

Liner notes by the conductor, complete song texts in the original language included in the booklet.