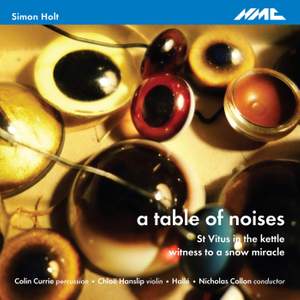 Simon Holt: a table of noises

quick-witted and haunting. Colin Currie is the soloist in this affectionate and entertaining work, while Nicholas Collon conducts the Hallé — Financial Times, 31st March 2017 More…

Holt, Simon: A Table of Noises

V. A drawer full of eyes

I. Eulalia of Merida

II. The tearing, the burning

This fourth, full-length album of music by multi award-winning composer Simon Holt on NMC showcases his highly narrative orchestral compositions. His violin concerto witness to a snow miracle – here performed by the prodigiously talented Chloë Hanslip – depicts the story of the life, and particularly gruesome death, of St Eulalia of Merida. From the initial, frenzied cadenza in the solo violin we get a sense of the torment and horror the saint suffered at the hands of the Romans: her flesh torn with hooks, fl ames applied to the wounds, and her body buried in hot coals. A blanket of snow fell on her ashes, at which point she was declared a saint. Holt's other award-winning concerto on this album is a much more upbeat and quirky affair. Written for and performed on this recording by one of the world's fi nest percussionists, Colin Currie, a table of noises introduces us to Holt's taxidermist great uncle Ashworth, a kind of maverick scientist-cum-collector. Currie says "this percussion concerto exuberantly tears up the manual on how to approach the medium and I am thrilled with the idiosyncratic, adventurous results". The soloist is seated on a cajon (a box-shaped instrument often used in fl amenco), and apart from the xylophone and glockenspiel, all the other instruments are laid out on a table in front of the soloist; hence the title. Each brief movement has a descriptive title (eg. a drawer full of eyes (discovered by Holt’s mother in Ash’s bedroom tallboy and Skennin’ Mary (a neighbour with a glass eye that spun when she became angry) and is linked by fi ve “ghost” orchestral interludes.

The short, dazzling, orchestral work St Vitus in the kettle was commissioned by BBC National Orchestra of Wales during Holt's tenure as Composer-in-Association (2008-2014). The grisly end for this saint was a cauldron of boiling hot lead!

quick-witted and haunting. Colin Currie is the soloist in this affectionate and entertaining work, while Nicholas Collon conducts the Hallé

The performances are difficult to fault

Witness to a Snow Miracle, for violin and orchestra, is not only one of Simon Holt’s finest achievements to date, but one of the most memorable British orchestral scores of the last 30 years...Hanslip’s solo violin seems to veer between portraying the child saint herself and being an onlooker at her gruesome martyrdom.