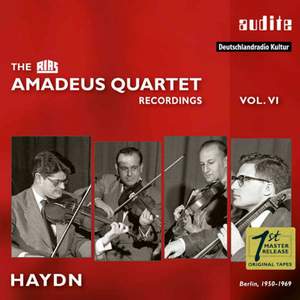 IV. Finale: Fuga a due soggetti

This sixth volume of the RIAS Amadeus Quartet Recordings completes the 27-CD edition. To honour the occasion, we are offering, at www.audite.de/21426, a comprehensive free download of the "Seven Last Words" (RIAS 1952) in a radiophonic version which combines the music recordings with bible readings and literary interpretations of these biblical texts, following the liturgical sequence of the first performance. This extended version complements the 6-CD box set, providing once again a detailed survey of broadcasting history in the 1950s - to which end the entire series of the audite Amadeus Quartet recordings is ultimately directed.

Joseph Haydn's string quartets, often rated as the basis for playing quartets, represented far more than an obligation to the Amadeus Quartet. During their entire career, spanning four decades, they thoroughly and continually dedicated themselves to these works, especially those of Haydn's middle and late periods. Most of their concert programmes featured a quartet by Haydn and in their sonic legacy - recordings on disc and for the radio - Haydn's string quartets make up more than a fifth of the total (only Beethoven's quartets were recorded with a similar frequency). The musicians held these works in such high esteem due, on the one hand, to their relative technical ease and, on the other, their high musical demands, as Norbert Brainin explained: "Everything that one plays in public is difficult. And the easier it is, the more difficult it becomes, as one then hears the fleas cough. Haydn and Mozart are a tightrope act."When preparing and rehearsing these works, the players had to examine the music closely, for many sections which appeared implausible in the old editions later on indeed proved erroneous when they were able to study Haydn's manuscripts and once the Urtext editions had been published.