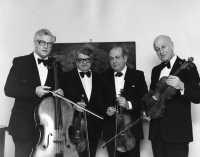 The Amadeus Quartet was a world famous string quartet founded in 1947.

Because of their Jewish origin, violinists Norbert Brainin, Siegmund Nissel and violist Peter Schidlof were driven out of Vienna after Hitler's Anschluss of 1938. Brainin and Schidlof met in a British internment camp; many Jewish refugees had the misfortune of being confined by the British as "enemy aliens" upon seeking refuge in the UK. Brainin was released after a few months, but Schidlof remained in the camp, where he met Nissel. Finally Schidlof and Nissel were released, and the three of them were able to study with violin pedagogue Max Rostal, who taught them free of charge. It was through Rostal that they met cellist Martin Lovett, and in 1947 they formed the Brainin Quartet, which was renamed the Amadeus Quartet in 1948.

Find out more at https://en.wikipedia.org/wiki/Amadeus_Quartet