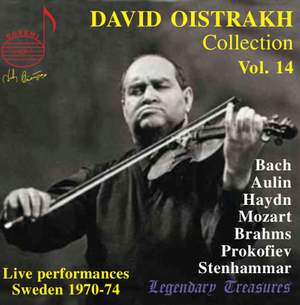 Sinfonia concertante in B-Flat Major, Hob. I:105: I. Allegro (Live)

Even four decades after his death, violinist David Oistrakh commands the highest admiration among fans, critics, and other performers as one of the most loved and admired musicians of all time. This is DOREMI’s fourteenth volume featuring David Oistrakh’s recordings and live broadcasts for the first time in digital and compact disc format. It includes live concerts which Oistrakh performed in Sweden between 1970 and 1974. The Haydn Sinfonia Concertante, Stenhammer violin sonata, and Aulin Berceuse are the only known performances of David Oistrakh on record.