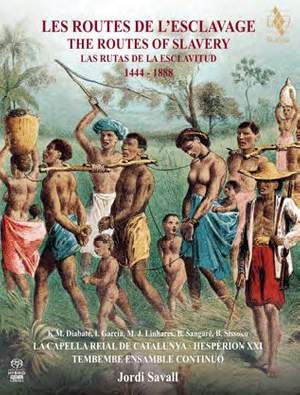 Savall’s brew is so rich that singling out individual performances is almost invidious, but tracks I love include songs from Brazil and Mexico sung by Maria Juliana Linhares and Ada Coronel,... — BBC Music Magazine, December 2017, 5 out of 5 stars More…

A homage to the memory of victims of the slave trade.

This new multicultural project from Jordi Savall and his musicians on The Routes of Slavery (1444-1888) marks a world first in the history of music and of the three continents involved in the trade in African slaves and their exploitation in the New World, which are brought together through the early music of the colonial period, the musical traditions of Mali and the oral traditions of the descendants of slaves in Madagascar, Brazil, Colombia and Mexico. This 'Musical Memoir' is accompanied with historical texts on slavery, beginning with the early chronicles of 1444 and concluding with texts written by the Nobel Peace Prize-winner Martin Luther King shortly before his assassination in 1968.

Sponsored by UNESCO, this musical reconciliation is founded on equality, harmony and reciprocal inspiration, constituting the commemoration of a tragic and shameful chapter in the history of mankind. A vast historical and musical fresco, which throws light on the West’s attitude towards Africans in Latin America, the United States and Europe, as well as its indifference towards that 'forgotten' continent of Africa. But it is also a joyful celebration of hearts and spirits united through music and dance, offering us all a vital source of survival, a refuge of peace, consolation and hope.

Savall’s brew is so rich that singling out individual performances is almost invidious, but tracks I love include songs from Brazil and Mexico sung by Maria Juliana Linhares and Ada Coronel, choral numbers by singers from the Capella Reial, and instrumental improvisations from Mali; everything performed by the Tembembe Ensamble Continuo has a genuineness which goes straight to the heart.

It’s both a timely reminder of our ignoble instinct to subjugate and a moving gesture of reconciliation.

[Savall’s] latest project explor[es] the musical trail left by the slave trade, and instead of trying to describe it, the narrations of contemporary descriptions of slavery, the music from percussion and simple improvisation to more formal choral works and pieces from Africa and Madagascar, to Spain, Mexico, Latin America …None does this kind of thing quite like Savall and his label Alia Vox.