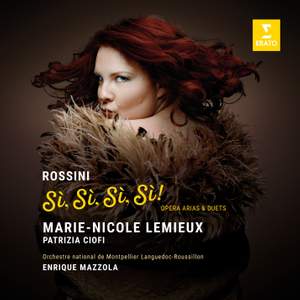 Lemieux is paired with the dreamy, soft soprano of Patrizia Ciofi and their voices intertwine very nicely in the Norma-like consecutive thirds of Tancredi’s ‘Lasciami: non t’ascolto’. The celebrated... — Gramophone Magazine, March 2017 More…

“Rossini has been a revelation for me,” says Canadian contralto Marie-Nicole Lemieux. The first fruit of her exclusive Erato contract is this live recording from Montpellier of arias and duets from Tancredi, Semiramide, L’italiana in Algeri and other serious and comic operas by the composer. She is joined by soprano Patrizia Ciofi and conductor Enrique Mazzola, also her partners for a 2014 staging of Tancredi in Paris, which prompted La Croix to praise her as “a generous artist with a voice that is both ample and easily produced across its entire tessitura … from the depths to top notes that flash like a cavalier’s sabre.”

Marie-Nicole Lemieux triumphantly defies the frequent assertion that the contralto is a dying breed. Moreover, with this live recital of Rossini arias and duets, the Canadian singer proves that a deep, rich, voluminous female voice can move with the same dazzling agility as a light, bright soprano.

Since she first came to the world’s attention in 2000, when she won the Queen Elisabeth International Music Competition for Opera in Brussels, Lemieux, who has been praised by Gramophone for her “velvet-like voice and generosity in phrasing and thought”, has established herself in a wide variety of operatic roles.

Lemieux is paired with the dreamy, soft soprano of Patrizia Ciofi and their voices intertwine very nicely in the Norma-like consecutive thirds of Tancredi’s ‘Lasciami: non t’ascolto’. The celebrated duet for Ninetta and Pippo from La gazza ladra combines pathos and fleetness of foot, spurred on by Enrique Mazzola and the Orchestre National Montpellier Languedoc-Rousillon, attentive colleagues throughout.

The Quebecois singer recalls the great Marilyn Horne in this repertoire, though her voice is more feminine in timbre, her persona perhaps more coquettish for Rosina’s and Isabella’s arias...The rarities are treats.