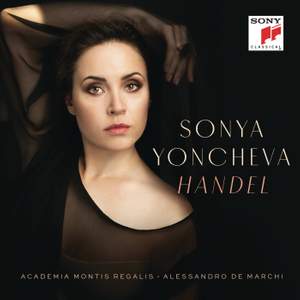 Yoncheva is a force of nature. Her top notes merit a gale warning, her words drip with passion, and the bloom of her lowest register equals that of her top. — BBC Music Magazine, April 2017, 5 out of 5 stars More…

Act III: Thy hand, Belinda...When I am laid in earth

Sonya Yoncheva devotes her second solo album to the music of Handel, showing another facet of her wide-ranging repertoire. Being an alumna of William Christie’s Le Jardin des Voix, the Baroque era formed her musical understanding at an early stage of her career, laying the foundation for her versatile & broad-reaching repertoire. Currently praised as “the best Traviata in the world at present” (Die Welt), Sonya Yoncheva is one of today’s fastest rising opera stars. She is a regular guest at the world’s leading opera houses such as the Metropolitan Opera, Royal Opera House, Bayerische Staatsoper, Berlin State Opera, Wiener Staatsoper & the Opéra de Paris. A great composer of vocal music, Handel based some of his most beautiful operas & oratories on the enchanting sensibility of the feminine voice. His heroines are strong, independent women determining their own destiny – attributes Sonya relates to in all respects. From Mar 3rd - Apr 18th, 2017 Sonya will embark on a concert tour featuring the Baroque repertoire highlighted on the Handel album release.

Yoncheva is a force of nature. Her top notes merit a gale warning, her words drip with passion, and the bloom of her lowest register equals that of her top.

the emotional balance of the programme favours Alcina, Cleopatra and Theodora’s songs of grief and torment, with a tendency to romanticise. Morgana’s skittish Tornami a vagheggiar, a showstopper in the theatre, is the highlight here: Yoncheva displays a delightful twinkle in the eye with her plush soprano, and negotiates the coloratura with pearly ease.

Sonya Yoncheva is very much the diva de nos jours…she brings her expected attributes to the arias - sensitive phrasing, even tone with a dash of spice to offset the smoothness