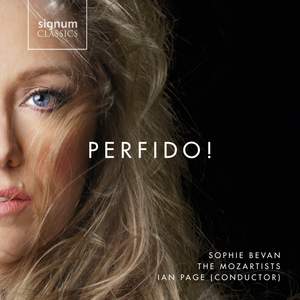 Concert-arias by Mozart, Haydn and Beethoven

Bevan’s energy and assurance see her through some demanding vocal writing…Page conducts with vigour and the orchestra makes a strong showing. — BBC Music Magazine, August 2017, 3 out of 5 stars More…

Described by the Observer as 'dazzling', leading British soprano Sophie Bevan performs a sumptuous programme of concert arias by Mozart, Haydn and Beethoven. Bevan is accompanied on this new recording by The Mozartists, recently launched by Ian Page’s internationally renowned period ensemble Classical Opera as an expansion of its continuing exploration of Mozart and his contemporaries.

Complementing Classical Opera’s ongoing recording series of the complete operas of Mozart, the creation of The Mozartists reflects the group’s expanding repertoire and ambitious plans, and they can be heard in concert from September 2017.

Bevan’s energy and assurance see her through some demanding vocal writing…Page conducts with vigour and the orchestra makes a strong showing.

She is, of course, hugely experienced in music of this period and brings a characteristically vivid intensity to each piece, tempered by an endearing touch of breathiness in the voice. The Mozartists are a brand-new spin-off from Ian Page's Classical Opera company and accompany with sensitivity and a welcome graininess to the string tone.

I simply can't stop listening to this glorious collection of Classical scenas and concert arias from the young British soprano, caught here just as the youthful freshness of the voice begins to take on more dramatic qualities - the stormy final sections of the Haydn and Beethoven in particular suggest heavier roles to come. Taut, incisive accompaniments from Page's Mozartists, too.

They take Bevan into more dramatic territory than she has explored hitherto. Ah! Perfido is powerfully propelled… there’s no doubting Bevan’s prowess

Sophie Bevan is highly successful… singing throughout with a gleaming tone and shaping lines with real sensitivity, but equally under the skin of the character she is portraying.

Bevan has made her reputation with her pure lyric soprano, but it's interesting to hear a bit of attractive smoke to the tone these days. Her voice is perhaps on the light side for these arias, but her partnership with Ian Page, who conducts, pays dividends as they sail confidently through the heavier perils of these dramatic pieces…an interesting disc of lesser-performed arias dispatched with freshness and style

Bevan [is] in imperious form yet alive to text and colour throughout...With delightfully pointed playing from Page's recently-formed ensemble, and with fine sound an presentation, this is a treasure.