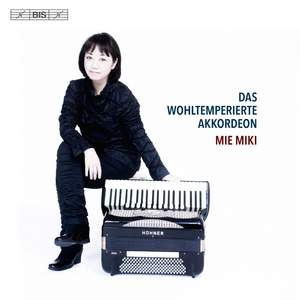 Bach’s Das Wohltemperierte Klavier has been called ‘The Old Testament’ of the piano literature and presents, in more ways than one, a pinnacle to be climbed by pianists and harpsichordists alike. As a leading accordion player with an astonishingly wide-ranging repertoire, Mie Miki has now accepted the challenge, selecting twelve of the 48 pairs of preludes and fugues.

For BIS Mie Miki has previously recorded Bach’s Italian Concerto, and as she did then, she performs the music from the original keyboard score without making any alterations to facilitate the transition to the accordion. The result is ear-opening – the accordion’s capacity for sustained notes brings out Bach’s fugal counterpoint, while the fast and light action of the instrument lends a particular fleetness to the preludes.