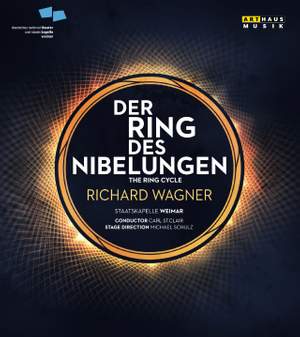 Orchestra and Chorus of the Staatskapelle Weimar, Carl St.Clair

Carl St. Clair is adept at handling both the apocalyptic mood of the music and the translucent shimmering of the forest. A brilliant achievement. — New Classics, May 2017

Outside Germany, the name Weimar tends to evoke mixed feelings and pictures of German history of the last hundred years. Within Germany, Weimar means a town in the state of Thuringia arguably saturated with the “Deutsche Kultur” of the “Weimarer Klassik”, the legendary Bauhaus, and finally the life and work of Franz Liszt and his son in law Richard Wagner. In Weimar Richard Wagner began composing the first part of his RING-cycle, "Das Rheingold”.

Carl St. Clair is adept at handling both the apocalyptic mood of the music and the translucent shimmering of the forest. A brilliant achievement.