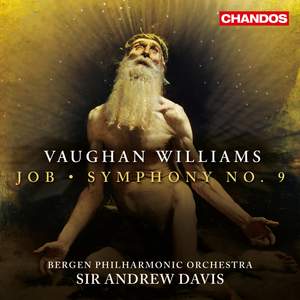 a performance of striking composure, lustre and palpable dedication. Not only do the Bergen Philharmonic respond with notable poise and eagerness (solo contributions are of the highest quality... — Gramophone Magazine, March 2017 More…

Scene 1: Sarabande of the Sons of God

Scene 3: Minuet of the Sons of Job and Their Wives

Scene 5: Dance of the Messengers

Scene 7: Pavane of the Sons of the Morning

Scene 8: Galliard of the Sons of Morning

David enjoys Andrew Davis' account of Vaughan Williams' most mysterious symphony, and the Biblical ballet Job, with the Bergen Philharmonic.

The projected complete cycle of Vaughan Williams’s symphonies started by the late Richard Hickox has left a precious heritage in the discography of the composer.

Now, conducting the Bergen Philharmonic Orchestra, that other expert in British repertoire, Sir Andrew Davis, takes on the challenge of completing the series with idiomatic interpretations of two masterpieces: the final Symphony (No. 9) and the ballet Job.

The score of Job places an emphasis on tableau-like scenes, dances, and mime, linking it to a tradition of English ballet with dances from the seventeenth century, including the saraband, pavane, and galliard. In this masterly score, Vaughan Williams captures the conflict between good and evil, between the spiritual and the material. Job shows a strength, beauty, nobility, and visionary power which unite the many different facets of Vaughan Williams’s musical style. The poignant and musically enigmatic Symphony No. 9 marks ‘the end of Ralph’s life and [is] a turning point. It is leading out into another place. It is extraordinary’, as the composer’s wife stated after one of the early performances.

The subtle direction of Sir Andrew Davis combined with the pure sound quality of this SACD does full justice to Hickox’s great enterprise and promises a powerful conclusion of this already acclaimed recorded cycle.

a performance of striking composure, lustre and palpable dedication. Not only do the Bergen Philharmonic respond with notable poise and eagerness (solo contributions are of the highest quality throughout), Davis conducts with unobtrusive authority as well as a sure hand on the structural tiller, uncovering a wealth of telling harmonic and textural detail along the way.

A mandatory purchase for all Vaughan Williams enthusiasts.

While the loss of Hickox was, and remains, a huge loss to fans of this music, there could be no finer conductor to receive the baton than Andrew Davis...Davis seems to avoid some of Handley’s showmanship – giving less of a punch to some of the more impassioned outbursts – but conversely there’s a clarity here in some of the more intricate contrapuntal passages that Handley sometimes fails to match.

The versatile Bergen band clearly revel in the expansive, unmistakably “English” tunes and the sometimes exotic orchestration...Davis today has no peers in this repertoire, which, added to Chandos’s brilliantly “present” sound engineering, makes this a self-recommending issue.

a searing performance of the enigmatic ninth symphony…Even better, though, is Job: a tremendous, Blake-inspired score whose challenges are triumphantly met here. It is one of Vaughan Williams’ most dramatic works and the sheer power of the Bergen forces (that organ!) contrast perfectly with sections of great textual beauty. Superb SACD sound

Davis, vastly experienced as a conductor of this composer, is every bit as idiomatic as the score’s dedicatee and finds the Bergen Philharmonic in virtuoso and sensitive form.