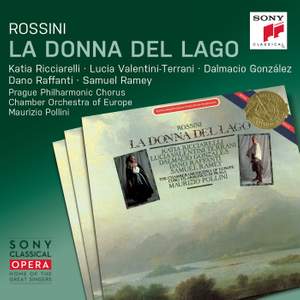 Rossini’s La donna del lago, loosely based on Sir Walter Scott’s The Lady of the Lake, “succeeds in conjuring up the atmosphere of the Scottish Highlands,” said BBC Music Magazine. “This tuneful, delicately orchestrated opera of innocent Romantic charm is given a splendid performance by the Chamber Orchestra of Europe under Maurizio Pollini and its cast could hardly be bettered today. Katia Ricciarelli brings to the title role rich creamy tone and a fine appreciation of the style, and Lucia Valentini Terrani is impressive in the travesti role of Malcolm. The two high-lying tenor parts are sung with assurance by Dalmacio Gonzales and Dano Raffanti, and Samuel Ramey is a tower of strength as Douglas, the heroine’s father. The recording is admirably clear and sensibly balanced.”