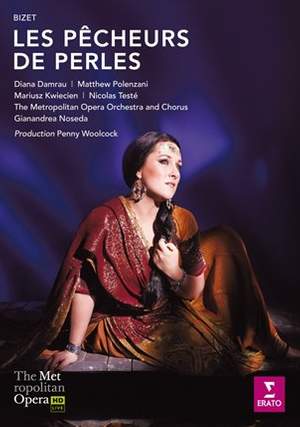 Bizet’s Les Pêcheurs de perles, set in Sri Lanka, is known above all for its unforgettable duet for tenor and baritone, but it its score is full of delightful and dramatic music. When recently staged at the Metropolitan Opera in New York it proved a major success, both for the production by Penny Woolcock and the musical performance, conducted by Paolo Noseda, with (once again) Diana Damrau as the priestess Leïla and, as the two men competing for love, the tenor Matthew Polenzani (Nadir) and the baritone Mariusz Kwiecien (Zurga). Woolcock’s concept brought the production up to date, with photographic and video references to the 2004 tsunami, and offered a superb ‘aquatic’ spectacle during the overture: the whole stage appeared to be beneath the Indian Ocean and acrobatic divers ‘swam’ down from the surface (located in the flies of the theatre).

It could hardly have been granted a better comeback, with a trio of superb singers...Damrau's Leïla is manifestly a real woman with real desires and demons…Polenzani surely has one of the most beautiful lyric voices around...But it’s Mariusz Kwiecien’s Zurga who gives the production its real dramatic impetus.