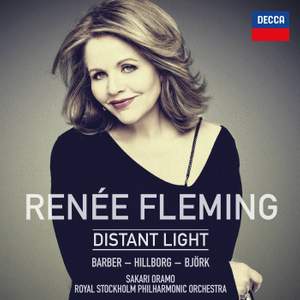 [The Strand Settings] already seems a classic with its declamatory vocal ardour, orchestral finesse, and communicative confluence of styles, from tinkling minimalism to a snatch of mock Handel.... — BBC Music Magazine, March 2017, 4 out of 5 stars More…

Björk: All is Full of Love

‘Distant Light’ is Renée Fleming’s first foray into the hypnotic world of Scandinavian music. For her first new studio album in three years she has chosen to inspire and provoke with a daring mix of music.

The title comes from a poem in a new song cycle dedicated to Renée and here receiving its world premiere recording: Anders Hillborg’s ‘The Strand Settings’.

"At once atmospheric, elegiac and unsettling, the work was crafted with Ms. Fleming’s creamy voice in mind”, wrote the New York Times at its first performance in 2013. One of Sweden’s brightest star composers Hillborg has a close relationship with the Royal Stockholm Philharmonic where this recording was made in February 2016 with its principal conductor Sakari Oramo.

Renée couples this with three songs by Björk in specially commissioned orchestrations by the brilliant Swedish composer and arranger Hans Ek, recorded here for the first time.

Why Björk? Both she and Renée are recipients of Sweden’s Polar Music Prize. Both dare to be original. In the fascinating booklet interview Renée talks about her admiration for Björk: “Her originality is breathtaking. She just blazes her own path forward”. Renée chooses the songs which mean the most to her personally and musically.

[The Strand Settings] already seems a classic with its declamatory vocal ardour, orchestral finesse, and communicative confluence of styles, from tinkling minimalism to a snatch of mock Handel. As she soars upwards on words like ‘stars’ and ‘freedom’ – Hillborg’s not afraid of the obvious – Fleming’s top register seems as golden as ever

At once alluring and uneasy, the songs are a gift for Renée Fleming, whose siren-like soprano draws the listener on to the unknown. The atmosphere is potently captured by Sakari Oramo and the Royal Stockholm Philharmonic Orchestra.

Fleming is in her best voice for Hillborg, sometimes digging into her lower range with great effect but also resorting to breathy mannerisms to characterise awed disbelief at the visions at hand…[she] finds much to connect with in the rhapsodic repetitions of ‘Jóga’. ‘All is Full of Love’ benefits from overdubbing: Fleming seems to be everywhere at once, with rather intoxicated effect

As a vehicle for the soaring purity of Fleming’s voice, and as an evocation of Strand’s very finely etched sensibility, Hillborg’s settings are genuinely beautiful and their cumulative effect is powerful...And the three songs by Björk that end the disc don’t seem out of place either.

[Fleming] still commands the creamiest, spine-shiveringly sensuous timbre in the business. That’s evident throughout Knoxville, as is her excellent diction, an area often perceived as her weakness...There’s a much more ghostly, even ominous, atmosphere in Hillborg’s writing.

Fleming obviously relishes the atmospheric music that Hillborg provides for her, and her soprano sails and swoops through the generally wistful and gossamer textures that the orchestration provides

Fleming is in great voice and makes the strongest possible case for the [Hillborg], and turns in a masterfully judged account of Barber’s lyric rhapsody.