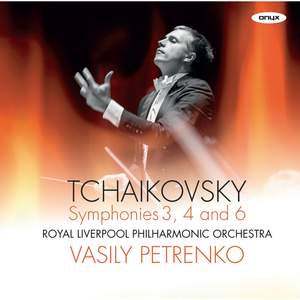 this second half of his Tchaikovsky symphonies cycles thrusts home for me a singular skill of his: the ability to build a long line over a substantial period of time. It happens to the generous... — BBC Music Magazine, April 2017, 4 out of 5 stars More…

Recording of the Week,  Vasily Petrenko completes his cycle of Tchaikovsky Symphonies

James listens to the culmination of Vasily Petrenko's Tchaikovsky cycle with the Royal Liverpool Philharmonic Orchestra - symphonies Nos. 3, 4, and 6.

Katherine talks to the Russian conductor about his Tchaikovsky cycle with the Liverpool Philharmonic on Onyx.

Petrenko’s Tchaikovsky promises to be one of the most important orchestral releases of 2017. Universal praise from reviewers for the first volume of Symphonies 1, 2 and 5 bodes well for this eagerly-awaited release: Gramophone gave Volume One an Editor’s choice and it reigned as a top 10 UK Classical chart title for 7 weeks in 2016.

this second half of his Tchaikovsky symphonies cycles thrusts home for me a singular skill of his: the ability to build a long line over a substantial period of time. It happens to the generous melodies at the hearts of the three slow movements here...He always does his own creative thing, and it works wonders on the Third Symphony.

Petrenko’s fast and furious approach once again pays off with invigorating performances which dispel Russian gloom. The RLPO play their socks off and must rank as one of the finest ‘Russian orchestras’ in the UK today...I commend Petrenko’s as the finest modern cycle of Tchaikovsky’s symphonies currently available.

Throughout, the Royal Liverpool Philharmonic Orchestra under Petrenko demonstrates its mature understanding for the writing, with one sensing that every note counts. Conspicuous is how Petrenko consistently shapes the orchestral sound, with dynamics and weight carefully balanced so that the admirable bass remain striking but never swamp the warm string sound.

One of the things that impressed me most throughout all the symphonies was the way that Petrenko sculpts the sound of his Liverpool players, and this is particularly true of the brass section. You can hear from the very opening how they make a nice fat sound, with some pleasingly robust horns, and yet at no point are they permitted to become overwhelmingly or distractingly loud. He has clearly given a lot of thought to weight of sound, and it pays off.

Although he is sometimes accused of slick superficiality, the charismatic young Russian is often electrifying in his native repertoire...As with most of his Shostakovich symphonies for Naxos, he has raised the orchestra’s game in this music to international level.

The Royal Liverpool Philharmonic Orchestra and their Russian chief conductor Vasily Petrenko have an instinctive rapport, audible in the electrifying first volume in this series (Symphonies 1, 2, 5). It’s evident again here, importantly in the much-loved No 6 (“Pathetique”).

All three performances bear the hallmark of Petrenko’s signature ability to lift music off the printed page and fill it with airborne elegance and vitality. As a result there is fiery, sometimes ferocious purpose in the Fourth without any temptation to weigh down Tchaikovsky’s opulent scoring. Similarly, he paces the Pathétique intuitively, complementing its heavy angst with a remarkable textural vividness and crisp energy.

The pleasure of Petrenko’s Tchaikovsky is its brightness, its snap … there’s no sense of the music being over-driven or the symphonic logic undermined. Petrenko finds instead a supple sort of exuberance and the playing is infectiously urgent

[this final volume] rounds off a scintillating series