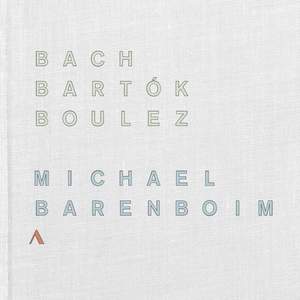 Apart from the extensive range of technique that Michael Barenboim effortlessly realises, the confidence and maturity of the musical language [in the Boulez] is stunning, and often harmonically... — BBC Music Magazine, June 2017, 3 out of 5 stars More…

Conceived like a solo recital, Michael Barenboim's first solo album features the works of three composers that have had a profound impact on his musical upbringing. On paper, these pieces could not seem any more different, but together they create an unexpectedly astonishing listening experience. J. S. Bach’s Sonata No. 3 for solo violin demands the greatest artistic and technical skills of the violinist and yet its melodic simplicity remains unmatched in its beauty. Béla Bartók’s Sonata Sz.117 was clearly inspired by Bach’s works for solo violin, carrying Bach’s ideas into the music of the 20th century. Filled with contrasts and yet bearing a uniquely poetic aura, the work is equally demanding for the violinist - if not more so - as the Bach. Finally, in his "Anthèmes", Pierre Boulez explores the boundaries of what can actually be played on the violin. The abstractness of Boulez's "Anthèmes 1" is surpassed by "Anthèmes 2", where live electronic elements that Boulez helped to develop at the IRCAM studios in Paris are added into the music. These two works create an entirely new sonic experience that serves as a musical frame for this exceptionally unique and extraordinary recording.

Apart from the extensive range of technique that Michael Barenboim effortlessly realises, the confidence and maturity of the musical language [in the Boulez] is stunning, and often harmonically and texturally beautiful

Barenboim makes it all sound easy, though, with performances spilling over with life and drama. Every work's soul has been ignited and revealed, every second telling a story, all unmarred by a single glitch in intonation or articulation.

This unusual programme demands the kind of disciplined virtuosity that Michael Barenboim (son of Daniel) has in spaces. His performances, flawlessly reproduced, are utterly persuasive and compelling. He has Boulez’s first-hand approval of his interpretation of the theatrical gestures of Anthèmes I & II and gives strikingly authoritative accounts, skilfully supported in Anthèmes II by Jeremie Henrot’s electronics

Bartók’s expansive four-movement Sonata (1944, for Yehudi Menuhin) finds Barenboim in gutsy and confident form for the arresting opening gesture and he goes on to use his virtuosic technique to clarify this complex music with shape and intensity, continued into the remaining movements, whether severe, touchingly expressive or, finally, racy and folksy (the last movement is without quartertones, as per Menuhin’s edition).