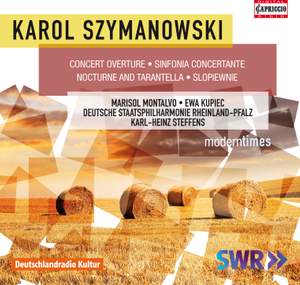 … the music is wonderful… the pleasure of an encounter with this gorgeous music. — MusicWeb International, May 2017 More…

Many think of the composer Szymanowski as a lone wolf, practically an outsider. His name is familiar to many on the music scene, but his works have all too often been excluded from the concert repertoire in favour of works by more popular contemporaries. Szymanowski’s musical development demonstrates a distinct progression. His earliest works were clearly influenced by the late Romantic style but, halfway through the First World War, he became particularly attracted to Impressionism. From then on he remained committed to tonality, but pushed it to its very limits. His orchestral works are typically characterised by lush, seductive blazes of colour that find their closest parallels in the music of Alexander Scriabin.

… the music is wonderful… the pleasure of an encounter with this gorgeous music.

the smooth playing of the Staatsphilharmonie Rheinland-Pfalz under Karl-Heinz Steffens…brings into being a variegated reflection of these works with a charm of its very own.