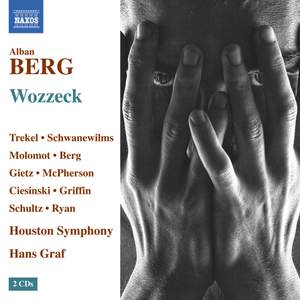 This live, 2013 concert performance by the Houston Symphony, under their then outging musical director Hans Graf, benefits from a stellar cast. Much is paid to orchestral detail, and Berg’s rhythmic... — BBC Music Magazine, March 2017, 3 out of 5 stars/4 out of 5 stars More…

Based on real events and playwright Georg Bu¨chner’s starkly vehement text, Alban Berg’s tragic opera Wozzeck is an epoch-making work, in stark contrast to the previous high romantic ideals of the genre, that led Schoenberg to exclaim “now that’s what I call an opera!” Immensely powerful and heartbreakingly moving as a drama, Wozzeck explores the victimisation, despair and madness of a central character who has no place in society, its deeply humane message and sublimely innovative score firmly establishing it as a 20th-century masterpiece.

This live, 2013 concert performance by the Houston Symphony, under their then outging musical director Hans Graf, benefits from a stellar cast. Much is paid to orchestral detail, and Berg’s rhythmic polyphony in particular is lucidly rendered.

one of the finest Wozzecks on record, orchestrally speaking: whether massed for the interludes or fragmented mid-scene, the players don’t miss a trick...The most memorable vocal impression is left by Anne Schwanewilms, who brings distinct and theatrical ideas about Marie to the concert platform...[Trekel's] Wozzeck is more sung, and evenly so, than most rivals on record; he travels through scenes like a noble savage.

A fine and very powerful Wozzeck from Houston, with Anne Schwanewilms magnificent and moving as Marie.

This new recording from the Houston Symphony under Hans Graf is as lustrous and well-fed as you’d expect from a Texan outfit, with thundering lower strings and glossy, supple wind lines…the singing is gripping: baritone Roman Trekel is one of today’s top Wozzecks, full-on and volatile, his violence cracked with frailty, and Anne Schwanewilms plays Marie with devastating dignity.