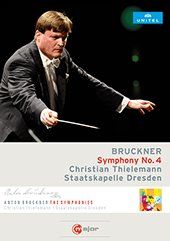 Recorded live at the Festspielhaus Baden-Baden, 23 May 2015

After the release of the Bruckner Symphonies Nos. 5, 8 and 9 with Christian Thielemann and the Staatskapelle Dresden, the Bruckner cycle is continued with Symphony No. 4, “Romantic”, one of Bruckner’s most popular work. It is played here in the presumed original version recovered by Robert Haas, which differs considerably from the first published score, accepted by Bruckner as a stopgap only so that the work could easily be performed. The press cheered the performance: “Tone paintings of the finest quality.” Picture format: NTSC 16:9

Thielemann keeps a firm grip on dynamic levels – ppp really means ppp – and the hushed playing is exquisitely rendered. The depth of sonority of horns, trombones and pizzicato double basses at 32’26” (just before fig M) is just one of the many outstanding moments, and the Scherzo’s brief Trio, delicately shaded and imbued with pastoral warmth, is similarly memorable