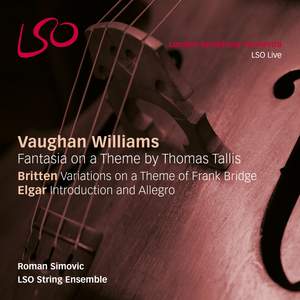 Vaughan Williams: Fantasia on a Theme of Thomas Tallis

The LSO counts the finest orchestral players among its members and many of its principals are renowned soloists in their own right. They have developed new ensembles within the Orchestra to hone their incredible musicianship in different ways: from recent recordings of Reich by the LSO Percussion Ensemble to unique chamber performances of Stravinsky's 'The Soldier’s Tale' and Mozart's 'Gran Partita'. The LSO String Ensemble, directed by Orchestra Leader Roman Simovic, are a key example of this practice, showcasing the wealth of talent that the London Symphony Orchestra has to offer.

Following two well-received releases, the LSO String Ensemble continues on LSO Live with three English masterpieces: Vaughan Williams' 'Fantasia on a Theme by Thomas Tallis', a visionary fusion of folksong and sacred music; Britten's 'Variations on a Theme of Frank Bridge', a challenging landmark of 20th-century string writing, here in a virtuosic performance; and Elgar's 'Introduction and Allegro', a work beloved of the LSO, having been composed for and premiered by the Orchestra.

"Delightfully sweet-toned lyricism, and an easy, smiling virtuosity". The Daily Telegraph on Roman Simovic. An acclaimed soloist, performing at many of the world’s most prestigious venues, Roman Simovic has awarded prizes at numerous international competitions, placing him among the foremost violinists of his generation. He says of these pieces: "it’s a big challenge for me to perform this wonderful English programme with an English orchestra. The LSO has a really special, unique, sound and to produce this standing up without a conductor, well it’s quite a challenge! But my fellow players are all fantastic musicians with huge knowledge and I think people more and more are looking forward to our concerts, because it’s something really special: real chamber music."

The playing is outstanding, and the textures brim with life and, and, in a great performance of Britten’s Frank Bridge Variations, which bounds off the page with spectacular characterisation, sheer energy.