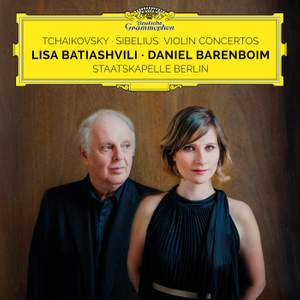 Katherine talks to the Georgian violinist about her recording of two of the most popular Romantic concertos - a Presto Disc of the Year.

James listens to the Georgian violinist's new double-bill of concertos, with the Staatskapelle Berlin under Daniel Barenboim.

Lisa Batiashvili and Staatskapelle Berlin under Daniel Barenboim’s baton present an unforgettable version of Tchaikovsky’ and Sibelius’ violin concertos, two of the most beloved, passionate and demanding pieces for violin and orchestra

Ten years ago Daniel Barenboim initiated Berlin's open-air "State Opera for All" concert on the historic Bebelplatz. With more than 40,000 spectators each year, it attracts a larger audience than any other classical concert in Germany. In each of the last four years the guest soloist has been Lisa Batiashvili, who on each occasion has performed one of the world's great violin concertos: Beethoven, Brahms, Tchaikovsky in 2015 and in this year Sibelius

"I absolutely love Sibelius' violin concerto. I have the feeling it's really a part of my life and of my musical story, because so many things happened around this concerto in my life. The first most important was the final of the Sibelius Competition in 1995 where I performed this concerto for the first time with the orchestra." – Lisa Batiashvili

As the youngest-ever participant of the Sibelius Competition, Lisa immediately managed to win the second prize – a jump-start to a lightning career

As Lisa recalls, her musical partnership with Daniel Barenboim started over the phone: "Barenboim heard me for the first time during a television broadcast of the Sibelius Concerto with the Finnish Radio Symphony Orchestra. Shortly afterwards he rang me up to congratulate me and ask me if we could perform the piece together."

"I feel that this time with Barenboim and Staatskapelle Berlin, we brought a lot of new insights to it in some ways, even though the ground feeling for me for the piece will always stay the same." – Lisa Batiashvili This version of the Sibelius Concerto brings back a fresh approach to the famous score, by being as true and faithful to the score as possible, and by avoiding all the known and repeated traditional playing conventions and habits.

This album is the first ever recording of Tchaikovsky's famous and romantic violin concerto for both, Lisa Batiashvili and Daniel Barenboim. "It was a big surprise to me to hear that he had never recorded Tchaikovsky and it makes it even more special for me. I have the feeling that we really worked on it very closely, because that was my strongest experience with that piece – just to work it with him…"

The Guardian stated about Lisa's performance with Daniel Barenboim and Staatskapelle Berlin at the Royal Festival Hall in 2015: "Lisa Batiashvili was the ferocious soloist in Tchaikovsky's Violin Concerto, intense in the first movement, luminous and heartfelt in the second, scintillating in the quickfire finale. It was a faultless performance, enthralling and electrifying."

Batiashvili focuses on poetic intimacy in this deeply thoughtful performance.

Everything feels ‘in the moment’, a quality of improvisation like music created in the playing of it. Her musicality always comes with an element of surprise...This is concerto-playing of the very highest order...Every familiar phrase somehow manages to sound both authoritative and newly discovered...a delight from start to finish.