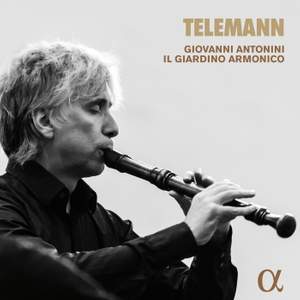 Antonini proves an athletic and affectionate communicator of this sophisticated music, enlivening the dances with well-judged tempos, cogent articulation and a light tread that would grace any... — BBC Music Magazine, April 2017, More…

Telemann: Suite in A Minor for Recorder, Strings & Continuo, TWV 55:A2

The year 2017 will mark the 250th anniversary of the death of Georg Philipp Telemann, one of the most prolific composers of the Baroque era. Giovanni Antonini and Il Giardino Armonico have taken this opportunity to pay tribute to his eclecticism in a programme juxtaposing works that move constantly between French and Italian stylistic traditions. On this disc, Giovanni Antonini not only directs the ensemble, but also returns to the recorder, his own instrument of choice (as it was the composer’s), and performs the Suite in A minor, the Concerto in C major and the Concerto da camera in G minor. We will also discover a curiosity, a sonata for chalumeaux.

This instrument of folk origins is comparable to the clarinet, and Telemann was the first composer to show an interest in it. Like volume 3 of the Haydn2032 Edition, this programme will be released on both CD and LP, thus asserting the common desire of the Alpha label and the Milanese ensemble to make these new recordings available to lovers of vinyl, who are more and more numerous.

Antonini proves an athletic and affectionate communicator of this sophisticated music, enlivening the dances with well-judged tempos, cogent articulation and a light tread that would grace any dance-floor.