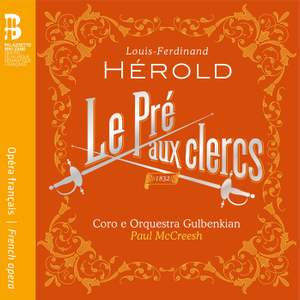 With Le Pré aux clercs, premiered at the Opéra-Comique in 1832, Louis-Ferdinand Hérold wrote at once his biggest success and his last opera (he died three weeks after the first performance).

From the Overture to the Act III finale, the simplicity of the vocal lines, the impact of the dramatic effects and the effectiveness of the choral writing testify to the flowering of Romanticism and the composer’s assimilation of Rossini, then the paragon of modernity. Following the July Revolution of 1830, it was time to exorcise unfortunate memories: as was its habit, the Paris operatic world did not treat the topic of politics directly but through the fratricidal conflict that began on St Bartholomew’s Day (25 August 1572).

The basis for the libretto was a novel by Prosper Mérimée published in 1829, Chronique du règne de Charles IX. The immense success of the opera, virtually contemporary with Meyerbeer’s Les Huguenots, shows that it was perfectly in tune with the preoccupations of the time – and with the new ambitions of a supposedly ‘light’ genre…

Hérold’s effervescent music is performed with tremendous charm by Paul McCreesh and the Gulbenkian Orchestra...Munger [is] in exquisite form, coloratura cascading like champagne...Ensembles fizz and it’s a joy to hear the mostly francophone cast in acres of dialogue.

As Isabelle, Marie-Eve Munger is enchanting throughout, but especially in 'Jours de mon enfance' - one of the score's undoubted lyric highlights. The orchestra is eminently skillful and under Paul McCreesh's persuasive baton gives a good idea of the score's very real strengths.