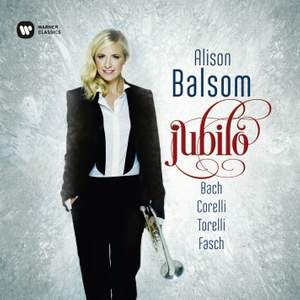 The solo playing gleams with lustre, but the musical connections with Christmas are peripheral — BBC Music Magazine, Christmas 2016, 3 out of 5 stars More…

With this release Alison records on the natural trumpet for the first time since the hugely successful album Sound the Trumpet. Inspired by seasonal Baroque repertoire, the recording includes concertos by Bach, Corelli, Torelli, and Fasch performed with the Academy of Ancient Music under the direction of violinist Pavlo Besnosiuk. The Schübler Chorales and In dulce jubilo by Bach, performed in arrangements for trumpet and organ played here by Stephen Cleobury, act as a beautiful foil to the full orchestral sound of the concertos. Bach’s Jesu Joy of Man's Desiring featuring Stephen Cleobury and the Choir of King’s College, Cambridge tops off this Christmas cracker of an album. This classy winter-themed album is a perfect core classical seasonal offering.

The solo playing gleams with lustre, but the musical connections with Christmas are peripheral

True highlights are the Fasch and Torelli concertos, where we get to fully appreciate Balsam’s immaculate, singing-toned clarion playing to the full. Equally, I was held transfixed through her long, fluid and wonderfully shaped obbligato lines above the Choir of King’s College in ‘Jesu, joy of man’s desiring’…some wonderful moments.