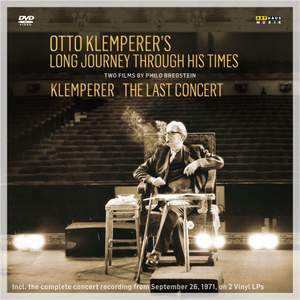 The exacting conductor, sometimes described as an architect of music, is celebrated in this box set release of two DVDs and two CDs. — New Classics, May 2017

Otto Klemperer was doubtlessly one of the most important and most influential conductors of the 20th century. His interpretations of Gustav Mahler, Richard Wagner, Ludwig van Beethoven and Johannes Brahms still belong to the standard for all generations of conductors today.

In Philo Bregstein’s film OTTO KLEMPERER’S LONG JOURNEY THROUGH HIS TIMES – restored, re-edited and finally available again after 20 years – you can follow Klemperer’s journey from Germany to the USA, back to Hungary and lastly to London, documented with a lot of detailand archive material. This film is a unique filmography that you will find nowhere else.

KLEMPERER THE LAST CONCERT shows exclusive film material of rehearsals and the “last” concert on September 26, 1971 in London in a documentary that can be called Klemperer’s musical legacy on film. The history and genesis of the films, Klemperer’s obvious significance as a musical visionary and his legacy to the generations of musicians after him are included in the over 250-page book accompanying the special edition. It brings together introductions by the director and his team, special discourses by renowned musicologists and a collection of rarely seen photographs.

As special features this edition includes not only the complete audio recording on 2 CDs – digitally remastered – of the last concert from London, but also never before seen filmed interviews with Pierre Boulez and Ernst Bloch from 1972.

The exacting conductor, sometimes described as an architect of music, is celebrated in this box set release of two DVDs and two CDs.