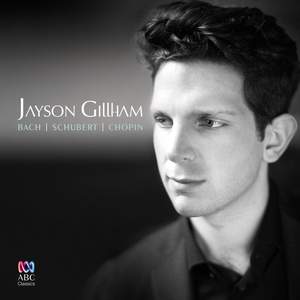 Growing up in outback Australia, Jayson Gillham travelled 500 kilometres every week to attend piano lessons. Now, after a stratospheric rise that has seen him acclaimed as one of the finest talents of the new generation, he presents his much-anticipated debut album: Bach / Schubert / Chopin.

Praised for his “absorbing and relentless elegance” (The Montreal Gazette), and possessing “a beautiful bell-like tone, a great sense of expressive lyricism, and virtuosity” (The Australian), Gillham moved to London in 2007, since when he has performed at venues including the Royal Festival Hall and Wigmore Hall in London and Louvre Auditorium in Paris, and with groups including the London Philharmonic, Nashville Symphony and English Chamber Orchestras.

Bach | Schubert | Chopin presents music of unparalleled beauty, vitality and joy by three masters of keyboard writing. The works highlight different aspects of Jayson’s superb musicianship. The album opens with the youthful exuberance of Bach’s Toccata in C minor (Bach was around the same age when he wrote it as Jayson when he recorded it). Schubert’s lyrical A major sonata showcases the sheer beauty of Jayson’s playing; and the Chopin Sonata in B minor, composed just five years before Chopin died, displays a depth in Jayson’s interpretative approach usually reserved for pianists of much more mature years.

To record the album, Jayson travelled to the Reitstadel in Neumarkt, Germany to work with renowned Tonmeister Andreas Neubronner (Murray Perahia, Arcadi Volodos, Khatia Buniatishvili). The Australian launch tour for the album will include recital performances in Sydney, Melbourne and Brisbane, and concerto performances with the Sydney Symphony Orchestra / Vladimir Ashkenazy, and the Adelaide Symphony Orchestra / Jeffrey Tate.