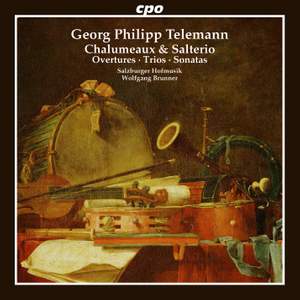 Telemann: Violin Sonata in A Major, TWV 41:A2 (Arr. for Hackbrett & Continuo)

Telemann: 12 Fantasias for Violin Without Bass

During Telemann’s early years the composer had become acquainted with Polish and Hanakian music and in his autobiography described its “genuine barbaric beauty”. The contrast between the rough simplicity of folk music and the court sphere was a source of inspiration him – he also expressly authorized the arrangement of other instrumental parts for chalumeaux, thereby broadening the musical colour palette of baroque music.

The overtures, trios, and sonatas scored for exotic instruments like the salterio not only display virtuosity but also are fun to play. »Recordings usually require the highest concentration and ‘serious work,’ but the sound engineer also captured our group ‘fooling around’ for relaxation – without our noticing it at the particular moment. Evidence supporting this claim is heard on the bonus track concluding this recording« (Wolfgang Brunner).