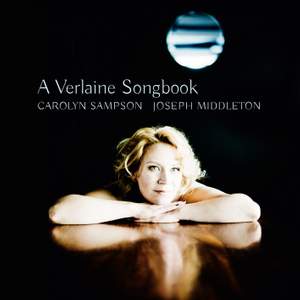 The discovery of the disc are the songs by ‘Poldowski’ – a pseudonym for Régine Wieniawski…her songs prove nothing short of fabulous: warm, energetic and melodic, with a deep-set richness of... — BBC Music Magazine, February 2017, 4 out of 5 stars More…

In his poem Art poétique, Paul Verlaine declared that poetry should, above all, be musical: 'De la musique avant toute chose'. This quality in his work was already recognized by composers during his lifetime, and it is sometimes claimed that Verlaine has been set to music more often than any other poet after him. For their Verlaine Songbook, Carolyn Sampson and Joseph Middleton have selected songs by ten composers, including two complete cycles – Fauré's La Bonne Chanson and Debussy's Ariettes oubliées. The 33 songs on the disc set a total of 25 texts – several poems by Verlaine have attracted more than one composer, and Clair de lune appears three times, in versions by Debussy, Fauré and Joseph Szulc, while La lune blanche can be heard no less than four, in versions by Fauré, Ernest Chausson, Reynaldo Hahn and Poldowski – the pseudonym of the Belgian-born British composer Régine Wieniawski. Released in 2015 to critical acclaim, Carolyn Sampson's début recital disc, Fleurs (BIS2102), was a flower-themed anthology with songs by composers ranging from Purcell to Benjamin Britten via Schubert and Debussy. On the present disc the repertoire is rather more concentrated in time – all songs were composed during a span of 35 years (c. 1880-1915) – but the variety is nevertheless striking: a reflection of how different artistic temperaments have responded to the many-facetted Verlaine.

The discovery of the disc are the songs by ‘Poldowski’ – a pseudonym for Régine Wieniawski…her songs prove nothing short of fabulous: warm, energetic and melodic, with a deep-set richness of harmonic language. Sampson’s pure, shining tone matches the finesse of this repertoire and her lower range sometimes has the softness and subtle qualities of a deep flute…Middleton provides a bright cushion of support throughout

[Sampson is] in excellent voice, her tone clear and silvery, her upper registers exquisite: Chausson’s ‘Apasiement’ sends shivers down your spine with its floated high pianissimos and suggestive portamentos…Middleton’s playing is marvellously fresh throughout, the thin dividing line between wit and melancholy superbly negotiated.

A garland of roses to everyone concerned.

Sampson adores these songs, caressing the text with her beautiful, pure soprano, particularly those that dwell on the correlation between nature and the emotions. Her partnership with Middleton is inspired, his intelligence always evident.