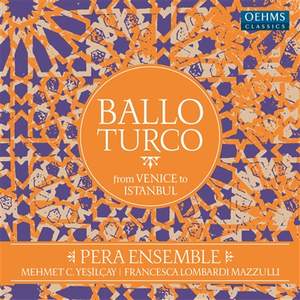 Ballo turco: From Venice to Istanbul

The Mediterranean Sea, the cradle of many great cultures and travel route between Orient and Occident, is the point of departure of this enthralling CD by the Pera Ensemble. On this recording, the Pera Ensemble has dedicated itself to the Early Baroque - the period of transition from the Renaissance to the Baroque period itself. The programme consists entirely of Italian music adapted together with Ottoman music.

As is so often the case with Mehmet C. Yeşilçay and his ensemble, there are also numerous world premieres and premiere recordings, which are are outstandingly interpreted by the soprano Francesca Lombardi Mazzulli.