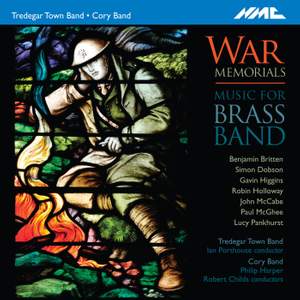 No. 1. Prelude: His Depth (Lucy Pankhurst)

No. 2. Scherzo: His Vitality (Simon Dobson)

No. 4. Toccata: His Skill (Gavin Higgins)

The period between the two world wars was one of the richest in music composed for brass bands. Elgar, Holst, Vaughan Williams, Herbert Howells, Arthur Bliss, John Ireland and others added their voices to a growing repertoire, but little of that paid tribute to the loss of so many young lives, countless brass musicians among them. The musical war memorials receiving their first recorded performances here are of more recent vintage. They are framed by the music of Benjamin Britten (1913-1976), whose pacifist sympathies are enshrined in some of his finest music, the War Requiem being the most well known.

The Tredegar Town Band revels [the Occasional Overture’s] winning combination of nonchalance and bustling virtuosity, its optimistic vision of post-war reconstruction complementing the often fraught and sombre character of much of the rest of the programme.