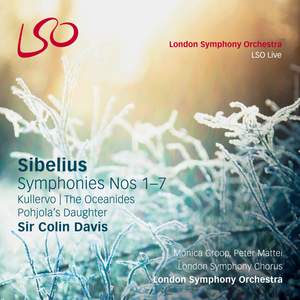 III. Kullervo And His Sister

Sir Colin Davis was instrumental in the development and success of LSO Live, including the label’s first Grammy award. He also played a huge part in the pre-eminence of the LSO across the globe for more than 50 years. A ‘master Sibelian’ his landmark cycle of the complete symphonies on LSO Live has been described as possibly "the finest Sibelius cycle on disc" by The Observer.

The original SACD Hybrid albums and accompanying CD boxed set are among the most successful and popular recordings on the label and they’re now presented as one complete SACD Hybrid and Pure Audio Blu-ray collection, bringing together 'Kullervo' with 'Pohjola’s Daughter', not available onthe original CD boxed set, and 'The Oceanides', previously only available as part of the limited edition 'Sir Colin Davis Anthology'.

Sibelius was one of the 20th century’s greatest and most innovative symphonists, reworking the traditional symphonic structure as radically as Beethoven did in his day. His music is characterised by beauty, mystery, colour and light, together with his strong love for his native Finnish homeland. Praised for their sound quality as well as the music-making, this digibox set of classic LSO Live recordings also features a Pure Audio Blu-ray, containing HD master audio, allowing listeners to experience this award-winning cycle in a whole new way.