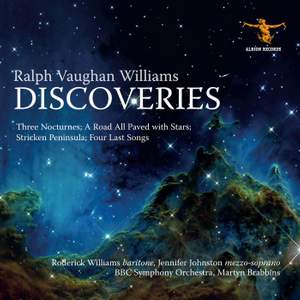 Three Nocturnes is the stand-out for me – performance, music itself, everything — BBC Music Magazine, January 2017, 4 out of 5 stars More…

Nocturne No. 2. Whispers of Heavenly Death

Nocturne No. 3. Out of the Rolling Ocean

Williams, Adrian: A Road All Paved with Stars (after R. Vaughan Williams' A Poisoned Kiss)

From Ralph Vaughan Williams’s earliest compositions to the works written near his death in 1958, this new release from Albion, Discoveries, explores his lesser known works from top to bottom. + All of the works here are world premiere recordings. Modern composers have jumped on board to make this project a reality. Anthony Payne has orchestrated Numbers I and II of the Three Nocturnes for Baritone and Orchestra, as well as Four Last Songs for Mezzo-Soprano and Orchestra, and celebrated arrangers Adrian Williams and Philip Lane have also contributed. + Two of Britain’s finest singers are featured on this release, Roderick Williams and Jennifer Johnston. These artists are joined by the BBC Symphony conducted by Martyn Brabbins. This project was made in conjunction with BBC Radio 3. + The Financial Times named Jennifer Johnston the “Face to Watch in Opera,” and she was called by both the Observer and BBC Music Magazine “a rising star.” She is a graduate of Cambridge University as well as the Royal College of Music, and has appeared in operas at the Teatro alls Scala, Salzburg Festival, Opera de Lille, and many more. + Roderick Williams has appeared as a soloist alongside the Scottish Opera, English National Opera, and at The Royal Opera House. In September 2014, he was a featured soloist at the Last Night of the Proms.

Three Nocturnes is the stand-out for me – performance, music itself, everything

Roderick Williams and Jennifer Johnston are on stellar form, while Martyn Brabbins and the BBC SO give of their very best both here and in two purely orchestral offerings…exemplary production values bolster the appeal of [this Albion release] which can be cordially recommended to all RVW acolytes

An important collection of Vaughan Williams discoveries. The Three Nocturnes make it a mandatory purchase.