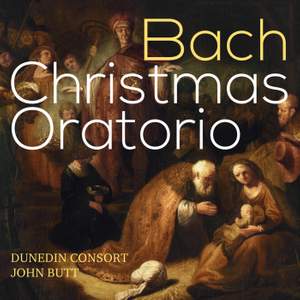 It has the same sense of freshness as previous releases…[with] a pleasing transparency of texture, and nimbly sprung rhythms under John Butt’s scholarly direction — BBC Music Magazine, Christmas 2016, 4 out of 5 stars More…

Recording of the Week,  Bach's Christmas Oratorio from John Butt and Handel's Messiah from Andrew Davis

David listens to a contrasting double-bill of festive oratorios, with the Dunedin Consort and the Toronto Mendelssohn Choir and Symphony Orchestra.

David talks to the Dunedin Consort's director about his latest recording of choral Bach.

The Dunedin Consort has established a reputation as one of the finest period performance choirs around, under the direction of prize-winning historical performance specialist John Butt OBE.

Further accolades include: Esther was voted one of the ‘Top 10 Classical Albums of 2012’ by The Times, Gramophone included Dunedin Consort in its ‘Twenty Greatest Choirs’ list and three of its recordings have been named a ‘Building A Library: First Choice’ by BBC Radio 3’s ‘Record Review’.

It has the same sense of freshness as previous releases…[with] a pleasing transparency of texture, and nimbly sprung rhythms under John Butt’s scholarly direction

the vigour and balance of the ensemble, the quality of the instrumental playing, the perfectly judged tempi, the intelligent singers’ splendid phrasing and breath control and the overall sense of line from all the performers combine to make this the best complete Christmas Oratorio I know.

Common to all Butt’s Bach is an irresistible brightness and freshness, a clarity that fascinates the ear with internal detail, and a glowing sound…the smaller forces also allow a flexibility of phrasing and textual emphasis that Butt is happy to exploit, as well as a lightness over the ground that enables him to keep strong momentum without ever seriously rushing a single tempo…this latest gift from the Dunedin Consort is one to go under the tree

This is a beautifully crafted performance...There’s an easy flow to the tempos and the glowing singing of the arias is matched by deeply impressive instrumental obbligatos.

the singers here are Dunedin regulars...with Mary Bevan as a standout newcomer. The choral sound is pert, sinewy, unforced; the instrumental playing is punchy, broad and charismatic. Butt’s navigation of the sprawling six cantatas is tremendously enjoyable.

John Butt's Dunedin Consort does it again. This red hot interpretation of the six cantatas that make up Bach's Christmas Oratorio holds the attention from the word go. The opening chorus, Jauchzet frohlocket, hits you like a lightning bolt, Butt's infectious energy and exhilarating musicianship infusing Bach's joyous music with utterly compelling brilliance.

Professor Butt has, of course, drawn on the best research to produce performances that are as close as can be determined to what the composer himself would have conducted. Eight of the finest singers share the ensemble and solo work...21 period specialist players joined the conductor's harpsichord[ist] and producer Philip Hobbs...to make this absolutely essential recording.