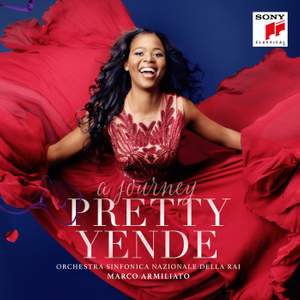 On this basis of this disc, I can imagine Pretty Yende will soon be in demand all over the world. — BBC Music Magazine, December 2016 More…

“It was instantly clear to everyone there that she was ready for the world's greatest stages. She has an extraordinarily beautiful voice with a phenomenal technique, and she lights up the stage with charisma.” - PLACIDO DOMINGO

Besides the much-loved Lakmé duet, which transformed Yende’s life and opened her heart to the world of opera, the recording also includes the touching scene ‘Vous que l’on dit’ from Rossini’s Le comte Ory. Yende gained dazzling international recognition in this opera when she starred opposite Juan Diego Flórez at the New York’s Metropolitan Opera in January 2013.

Juliette’s ‘Amour ranime mon courage’ from Gounod’s Roméo et Juliette represents the aria performed at the International Belvedere Competition in 2009, in which she made history by becoming the first artist to win first prize in every category. This success also led to an offer to join the prestigious young artists’ programme at La Scala in Milan.

With ‘Ah, la pena’ from Bellini’s Beatrice di Tenda, Yende continued her success at international competitions. This time she scintillated in Plácido Domingo’s renowned Operalia Competition in 2011. Again she was the first singer in history to receive not only the first prize but also the prize of the public and the Zarzuela prize.

A particularly significant and moving event for the young singer came when she returned to her homeland in 2013 to sing the title role in Donizetti’s Lucia di Lammermoor in Cape Town. From this opera she has chosen the much-loved aria ‘Regnava nel silenzio’.

Born in 1985 in the small town of Piet Retief, about two hundred miles from Johannesburg, Yende’s journey to become one of the world’s most sought-after sopranos is like a modern fairy-tale. She was initially introduced to singing in a manner familiar to many South Africans - in her church choir. Then at the age of sixteen, she heard the Flower Duet from Lakmé on a British Airways television advertisement, and was so enraptured by its beauty that she determined to find out what it was. On learning that it was opera, she decided at that moment to abandon her plans to become an accountant, and train to become an opera singer instead.

She gained a scholarship to study at the South African College of Music in Cape Town with Professor Virginia Davids, the first black woman to appear on opera stages during the apartheid years in South Africa. With Davids’s help, Yende triumphed at the 2009 Belvedere Competition and Operalia Competition (2011) and has joined the prestigious young artists’ programme at La Scala in Milan. She continues to study with the celebrated soprano Mariella Devia.

On this basis of this disc, I can imagine Pretty Yende will soon be in demand all over the world.

Hers is a lyric coloratura voice of real beauty and flexibility. There’s a dash of cream to it, and she phrases with instinctive musicality and feel for line, meaning that her Bellini and Donizetti, in particular, have a real seductiveness to them…Yende isn’t quite the finished product…[but she] is clearly a major talent, and one who is only going to get better

The rarely extracted aria ‘Ma la sola, ohimè! son io’ from Bellini’s Beatrice di Tenda is a token of the 2011 Operalia Competition, where— uniquely—she carried off all three prizes: First Prize, the Zarzuela Prize and the Audience Prize, with this aria one of her submissions. The sheer beauty of her tone, her technical accomplishment and her sense of both character and dramatic engagement once again carry the day.

The ubiquitous Flower Duet from Lakmé is on this portrait disc, but Yende’s lustrous, appealingly forward soprano tone and somersaulting vocal agility are showcased far more effectively by the other six numbers...there’s definitely something winning about Yende’s fearless, can-do singing.

Her debut recording for Sony whets the appetite, tackling as it does some of the most fearsome challenges in the bel canto repertoire with fearless attack, plenty of zinging high notes (including a splendid high E casually capping Una voce poco fa from Rossini’s Barber of Seville), and sensitivity to emotional mood and vocal colour.

Her singing boasts an elegant sheen that carries across a wide vocal range, and she uses it to wonderful emotional effect even as she dashes off music with demanding technical challenges...And she brings to all of it an audible vivacity that must be even more magnetic in the opera house.