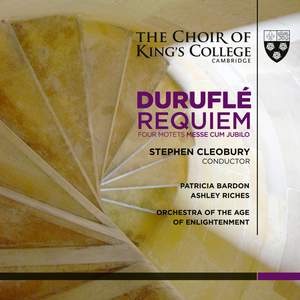 The Choir of King's College Cambridge & Orchestra of the Age of Enlightenment, Stephen Cleobury

The most famous of the Four Motets is 'Ubi Caritas' (‘Where charity and love are, God is there), a staple of the choir’s Easter repertoire and which was sung at Downing Street when the choir attended the Prime Minister’s Easter reception in 2013.

This recording represents the last time the organ at King’s was played before it was removed for substantial restoration.

The choir and the King’s organ (played by Tom Etheridge) are beautifully caught in the famously generous chapel acoustics, tender and lyrical one moment, splendid and grand the next … the men of the choir produce a consistently warm, well-focused sound. A fine addition to the Duruflé discography and to King’s College’s expanding library of own-label recordings.

The Choir of King’s College, Cambridge and Stephen Cleobury opt for the 1961 edition, joining forces with the Orchestra of the Age of Enlightenment and soloist Patricia Bardon (the baritone solos are performed by unison basses). The effect is often hazily beautiful, chords suspended in the air of King’s Chapel

this is an excellent disc. The performances have been very well recorded and the documentation is good.