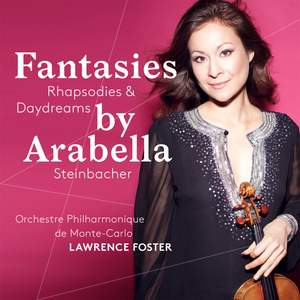 This recital is something of a triumph for violinist Arabella Steinbacher. [Waxman’s Carmen Fantasy] is finger-cripplingly difficult, and…Steinbacher makes it sound like a neat-masterpiece…saving... — BBC Music Magazine, January 2017, 5 out of 5 stars More…

Spectacular virtuoso playing, bravura passagework and show-stopping melodies are balanced with wistful lyricism and sublime tone painting in this irresistible programme of perennial favourites, played with élan by the violinist Arabella Steinbacher with the Orchestre Philharmonique de Monte-Carlo, conducted by Lawrence Foster in this new release from PENTATONE.

From the high jinks and outrageous showmanship of Franz Waxman’s Carmen Fantasie and Pablo de Sarasate’s Zigeunerweisen, to the fearsome technical demands of Ravel’s Tzigane and the exquisite refinement of Saint-Saëns’ Havanaise and Introduction et Rondo capriccioso, this album harks back to an earlier era of violin playing.

“Great violinists like Heifetz, Kreisler, Menuhin … played virtuosic pieces in their concerts,” recalled Steinbacher in a recent interview. She lamented that such pieces are infrequently played owing to the perception that “…this kind of repertoire is ‘not serious enough’ which I find is really a pity and also not true.” For the scintillating Carmen Fantasie, Steinbacher freely admitted that Heifetz was her inspiration. When she heard, that the piece was composed for him mid-career, she was very impressed and decided to make that journey as well “...and I am very glad I did it!”

In a change of pace, the album also features the work which has topped Classic FM’s listeners’ “Hall of Fame” for the last three years running: the much-loved and achingly lyrical The Lark Ascending by Vaughan Williams.

Ever the listeners’ favourite, this beautiful piece with its soaring violin part has never been bettered for its sublime depiction of an English rural idyll and it seems fitting that Vaughan Williams completed it following the horrors of the First WorldWar. In a similar spiritual vein, the Méditation from “Thaïs” is included, Massanet’s most famous and imitated work which retains the power to this day to spellbind audiences.

This recital is something of a triumph for violinist Arabella Steinbacher. [Waxman’s Carmen Fantasy] is finger-cripplingly difficult, and…Steinbacher makes it sound like a neat-masterpiece…saving perhaps the best till last, Ravel’s Tzigane, whose opening extended cadenza simmers seductively in a twilight world ravishingly free of bar-lines and pyrotechnical display.

The Méditation from Thaïs is done with breathtaking beauty, a turn-on for any newcomer to the violin