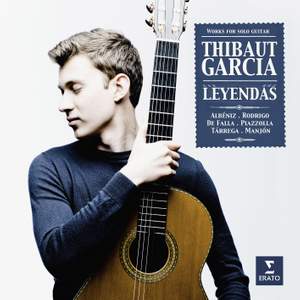 Garcia’s smooth, rich and sweet sound and impeccable virtuosity, in a spacey and warm acoustic, may not be a totally individual voice yet. But this [is] a delight for everyone, from the curious... — BBC Music Magazine, January 2017, 5 out of 5 stars More…

A Frenchman with Spanish blood, 22-year-old guitarist Thibaut Garcia makes his Erato debut with Leyendas (Legends), an atmospheric recital of music by Spanish and Argentinian composers: Albéniz, Falla, Rodrigo, Tárrega (his famous, shimmering Recuerdos de la Alhambra), Manjón and Piazzolla. “I wanted to show the guitar in its full glory,” says Garcia. “These legendary works are so close to my heart because they are part of my life and my travels.”

“This is music which made me love the guitar and which also reminds me of my Spanish roots. It shows various facets of the instrument, from the more popular style of Piazzolla’s Estaciones Porteñas and Falla’s Siete canciones populares españolas to the more classical, intimate and elegant world of Albéniz. I am a great fan of music from the early 20th century – it displays the full palette of colours that the guitar can offer.”

Making a guest appearance on the album is Erato cellist Edgar Moreau, who plays in the group of pieces by Falla. “This was the first time Edgar and I played together,” says Garcia. “It felt spontaneous, like two friends getting to know each other.”

Garcia’s smooth, rich and sweet sound and impeccable virtuosity, in a spacey and warm acoustic, may not be a totally individual voice yet. But this [is] a delight for everyone, from the curious discovering the core Latin guitar repertoire, to collectors who want the best…this outstandingly played, well-balanced, well-thought selection is definitely up among them