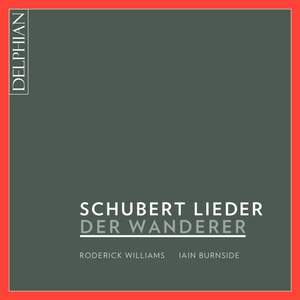 Katherine talks to the baritone about the first furlong of his Schubertian odyssey.

Following the critical acclaim for Iain Burnside’s partnership with soprano Ailish Tynan in the first volume of Burnside’s Schubert song series on Delphian, this second volume sees him partnered by another friend and long-term collaborator, baritone Roderick Williams. Their lovingly designed programme takes its tone from the strand of journeying and farewell that threads through Schubert’s song output. Burnside’s pianism is as masterful and vivid as ever, while Roderick Williams, fresh from his triumph at the 2016 Royal Philharmonic Society Awards, combines drama and intellect and shows the qualities that continue to endear him both to critics and to audiences.

an exceptionally imaginative and satisfying piece of programming

Williams is an unfailingly intelligent singer and is matched every step of the way by Burnside. Intepretatively they barely put a foot wrong... This is an enjoyable - and beautifully recorded - programme.

This is a most intelligently planned programme and the execution by Roderick Williams and Iain Burnside is superb. The recital is as enjoyable as it is distinguished.

There’s a wonderfully unfussy openness and sincerity to Williams’s delivery that I’ve only ever heard rivalled by Christian Gerhaher...even in the darkest nights of the soul there’s always a flicker of hope which asserts itself more tangibly than in rival interpretations...little miracles from Iain Burnside, too, who plays with such clarity that details which are often glossed over make their presence felt.