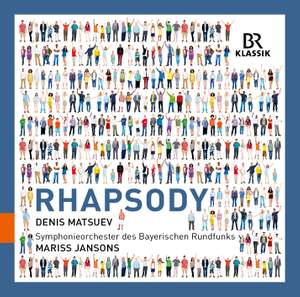 No. 2 in C-Sharp Minor (arr. K. Müller-Berghaus for orchestra)

This latest CD from BR KLASSIK contains five great rhapsodies, devised and elaborated by very different composers from different regions, with a lot of imagination and local flavour. With his rhapsody "España" the Frenchman Emmanuel Chabrier focused on the Iberian music and folk music so popular at the time, as did his more famous compatriot Maurice Ravel with his "Rhapsodie espagnole", the four-movement structure of which still harks back to long-outdated symphonic forms. From the Hungarian-born Franz Liszt we have the famous "Hungarian Rhapsody" No. 2, and from the Romanian composer George Enescu the scarcely less famous and popular "Romanian Rhapsody". The American George Gershwin created what was probably the most famous example of the genre in the 20th century with his "Rhapsody in Blue" for piano and orchestra… The Symphonieorchester des Bayerischen Rundfunks under their chief conductor Mariss Jansons are a guarantee of outstanding interpretative quality for these large-scale rhapsodic musical works. The Russian pianist Denis Matusev – internationally famous ever since he won the Tchaikovsky Piano Competition in Moscow in 1998 – proves to be a sovereign and stylistically confident interpreter of George Gershwin’s concertante masterpiece, with its numerous jazz elements. The live recording of this concert was made in October 2015 in the Herkulessaal of the Munich Residenz.

[the Ravel] is played with a satisfying balance of exactitude and flair…[the Gershwin is] full of fire and fun, despite the occasional overindulgence

This disc is a bit of a guilty pleasure.