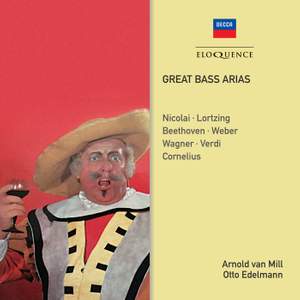 fine musical oratory [in the Wagner] … Edelmann sings this quite enchanting music [Cornelius] with a superb legato, and I would buy the disc of this aria alone — Gramophone Classical Music Guide, May 1952 More…

The Dutchman Arnold van Mill (1921–1996) never enjoyed the international fame of his German contemporary Gottlob Frick or the younger Martti Talvela and Nicolai Ghiaurov. Yet at the height of his formidable powers in the 1950s and 60s, he had few rivals for rotund depth and sonority of tone (with what Hope-Wallace called ‘double bass tug’) and versatility in a repertoire that stretched from Mozart’s surly Harem overseer Osmin, via Verdi to Wagner. In this, one of his all-too-rare recital discs, he displays that typical amplitude and generosity of voice, and shows how seamlessly he can move from geniality and humour to baleful and black-voiced.

Like Van Mill, Edelmann sealed his international reputation at the 1951 Bayreuth Festival, where his Hans Sachs was admired for its robustness and authority, flecked with mischievous humour. Edelmann’s resonant, cleanly focused bass (without woolliness or ‘spread’) lay a tone or so higher than Van Mill’s. His extremely rare 1951 recital disc for Decca here forms a coupling to Van Mill’s recital for Philips.

fine musical oratory [in the Wagner] … Edelmann sings this quite enchanting music [Cornelius] with a superb legato, and I would buy the disc of this aria alone

one of the most magnificent bass voices I know