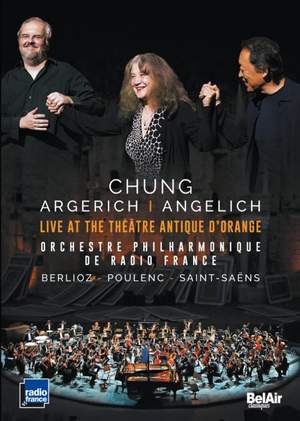 Argerich has long made the Poulenc a party piece of hers and with Angerlich gives a super-charged performance to relish — Classical Music, September 2016, 4 out of 5 stars

Rachmaninov: Pieces (2) in A major for piano 6 hands: Romance

Martha Argerich and Nicholas Angelich alongside Myung-Whun Chung for a concert homage by the Orchestre Philharmonique de Radio France to its conductor in the magical setting of the Théâtre Antique in Orange.

The concert begins with Berlioz’s Roman Carnival Overture, composed in 1844 and ends with Saint-Saëns’s Third Symphony in C minor. This 'Organ' Symphony, dating from 1885-86, is dedicated to Franz Liszt, who had recently died.

Between these two works, the internationally celebrated Argentine pianist Martha Argerich and the equally talented American Nicholas Angelich join to interpret Francis Poulenc’s Concerto for Two Pianos and Orchestra, a joyous score in the musical spirit of the 1930s.

The Korean conductor-pianist Myung-Whun Chung conducts the Orchestre Philharmonique de Radio France, which he has shaped over many long years.